What Are the Benefits of Marine Snow? 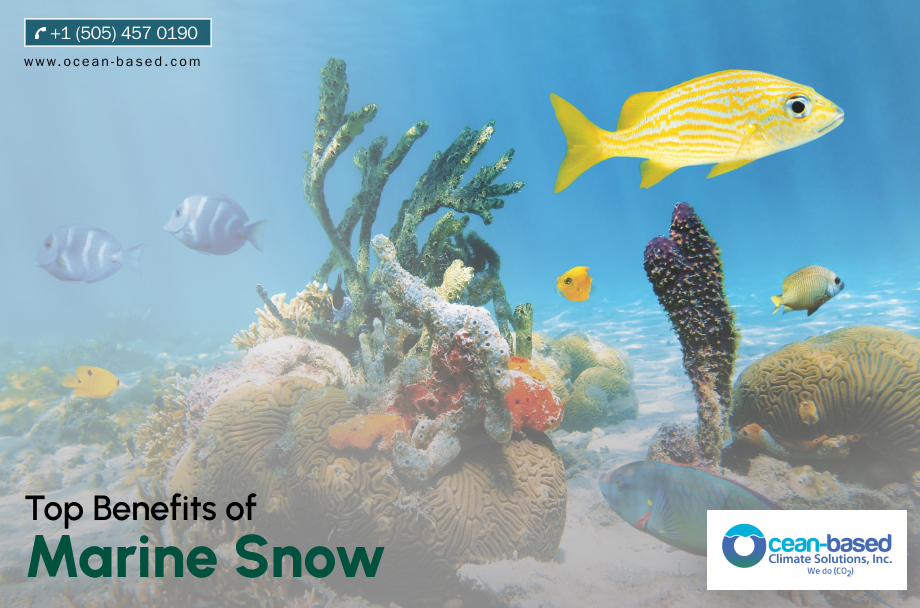 Some animals and plants die naturally near the ocean’s surface and decompose. The ocean floor is then covered with this biological debris or remains. The slowly dispersing debris frequently resembles snowflakes and looks almost whitish. This gradually turns into Marine Snow. Marine snow may contain feces, inorganic dust, soot, sand, and plant and animal waste.

Interestingly, ‘marine snow’ flakes can expand as they fall by clumping together. This resembles real snowflakes, which frequently group or aggregate as they drop from clouds. Marine snow is crucial in the global carbon cycle, which you will read here.

The presence of marine snow varies with seasonal variations in photosynthetic activity and ocean currents because it originates from activities occurring within the productive photic (sunlit) zone. Marine snow can be a significant food source for organisms in the aphotic (no sunlight) zone, especially for those found deep in the water column. Besides, there are other reasons for which Ocean-Based Climate Solutions Inc., a top carbon sequestration company, considers marine snow to be a boon.

The Noted Benefits of Marine Snow

Take a look at the most noted benefits rendered to the environment by marine snow.

Marine snow transports food from the lighter surface ocean’s photosynthesis to the deeper and darker ocean. The animals and microbes that live in what we refer to as “the twilight zone” (middle layers) rely on marine snow for vital food.

3.   Acts As a Biological Pump

Carbon transported by the biological pump as marine snow into the deep ocean can stay out of contact with the atmosphere for more than a thousand years due to the ocean’s thermohaline circulation’s relatively long residence time. For rather long timescales associated with ocean circulation, the inorganic nutrients, as well as the dissolved carbon dioxide that are ultimately formed from the decomposition of the marine snow, are successfully secluded from the surface ocean.

As a result, several geoengineering plans to increase ocean carbon sequestration are based on increasing the amount of marine snow which reaches the deep ocean. Increased production of organic material in the surface ocean is the goal of ocean nutrition and iron fertilization, which will also result in more marine snow falling into the deep sea. These efforts have not yet resulted in long-lasting fertilization that efficiently removes carbon from the system.

4.    Forms a Primary Source of Energy

Marine snow forms a primary energy source for all organisms that do not get sunlight. Therefore, even when the remains and dead of the creatures remain on the seafloor, they do not go to waste. They continue to be necessary to several deep-sea creatures that fail to receive the required energy.

5.    Cools Down the Earth’s Atmosphere

One of the primary chemical components of living things is carbon, which causes an ever-increasing layer of carbon on the ocean floor. On Earth, this layer of the deep sea holds tons of carbon. Land-dwellers are starting to wonder what role underwater debris can play as an increase in atmospheric carbon is causing temperatures to rise. However, the formation of marine snow has grown over the past 50 million years, absorbing carbon and cooling Earth’s climate.

Ocean-Based Climate Solutions Inc., one of the most ambitious CO2 sequestration companies, finds it amazing how the accumulation of marine snow contributes to its carbon removal projects. The company aims to remove carbon dioxide from the atmosphere and sink it into the ocean waters. At times, the carbon dioxide from the marine snow might also be churned up by giant oceanic creatures like blue whales along with the nutrients. The phytoplankton use this carbon dioxide, sunlight, and nutrients available in the marine waters to produce food. As a result, they give out fresh oxygen as a part of photosynthesis, contributing to reversing climate change.