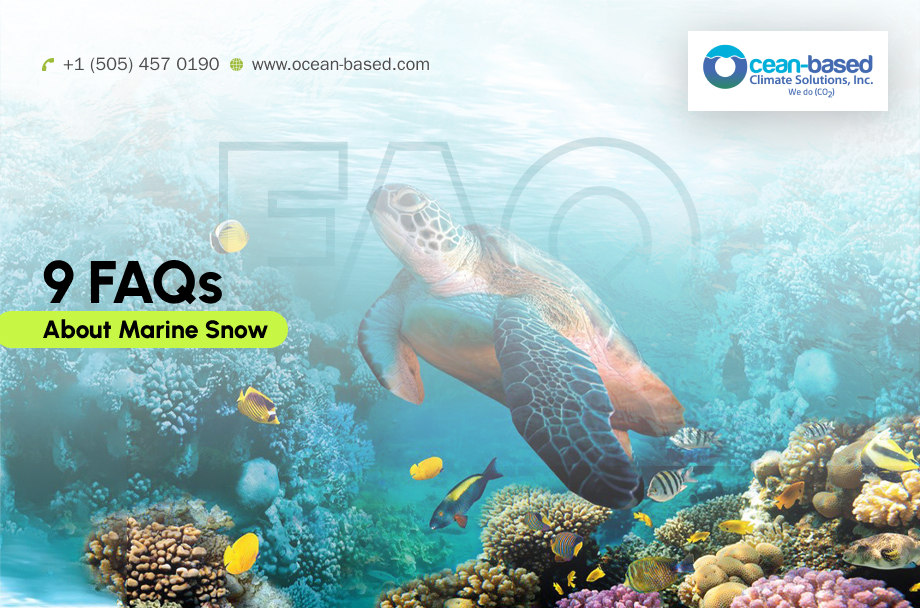 Are you amazed to know that something called marine snow even exists? Then you might find this article to be extremely interesting. We have put together some of the most frequently asked questions that interested readers often flood us with! You will find much information about marine snow, how they contribute to global climate reversal, and the use of negative emissions technologies.

Read these questions to enlighten yourself about marine snow!

Ans: This is the most common question! In the 1930s, William Beebe, a scientific diver and explorer, coined the term “marine snow.” It is made up of nutrient-rich organic matter and spreads like snow from the ocean’s surface to its bottom. The dead and decayed plankton that inhabit the ocean’s surface sink to the seafloor. Gradually they form mounds of white deposits that look like small snow-capped hills.

Ans: It exactly resembles white snowflakes falling from the sky. Only that, this ‘snow’ sinks from the surface of the oceans to their bottom. These snowflakes represent one of the major ‘biological pumps’ of atmospheric carbon dioxide into the sea. The particles look like weightless white flakes that seem to be floating in the water, like a snowflake that slowly descends while falling from the sky.

Ans: Marine snow is not harmful. It is a heap of remains and fecal matter from aquatic creatures. These sink to the ocean floor and take down organic carbon content. In a way, they help reduce the carbon dioxide contents from the atmosphere by trapping them within themselves. In a way, we owe marine snow for bringing down the soaring global temperatures and making the atmosphere cooler.

Ans: The decomposing substance is alluded to as ‘marine snow’ because it starts to resemble some white fluffy bits. The ‘snowflakes’ begin to grow in size as they fall towards the ocean floor. Some of them have a diameter of several centimeters, and some are also tiny. Some flakes keep sinking for weeks before they finally reach the ocean floor; by then, they have already grown bigger.

Ans: Whatever is still sinking continues to do so slowly until it hits the ocean floor or is eaten by other deep-dwelling creatures. Marine snow can take up to two weeks to sink to the bottom, falling at 100 to 800 meters per day.

Ans: Marine snow provides essential nutrients and energy to various deep-sea marine life, from tiny bacteria to fish. These creatures thrive on marine snow as they cannot always travel to the source of food or energy, which may be far away from where they dwell. So, when the flakes begin to fall, these creatures consume them.

Ans: Marine snow is a significant carbon sink in our oceans. These particles, particulate organic carbon, are abundant in carbon dioxide, the greenhouse gas causing global warming,and other macronutrients like nitrate, phosphate, silicate, and trace minerals like iron. The carbon-rich leftover materials, which make up a large portion of the bottom heap of organic ooze, will sit and remain dormant until it is picked up by deep-sea currents and carried back to the surface, where they can rejoin the ocean’s food chain and our atmosphere.

Ans: The world’s oceans contain marine snow particles, which are present in all water bodies. They are not equally distributed in time or space. Still, they tend to be more concentrated in the higher water column layers and the biologically productive ocean areas.

Ans: There is more to marine snow than snow-capped marine snow hills at the bottom of the ocean to bring food for the smallest of creatures. Marine snow also serves as a carbon sink, soaking up atmospheric carbon dioxide emissions and storing the carbon for a millennium. Marine snow serves as one of nature’s most effective barriers to global warming in this way. Thus, by sinking carbon dioxide dissolved in the ocean’s surface and from our atmosphere, such as marine snow made by phytoplankton blooms, marine snow brings down what would otherwise be unbearably hot temperatures on Earth.

At Ocean-Based Climate Solutions Inc., one of the top carbon removal companies, we are committed to making the Earth free from excessive carbon dioxide. For this, we are manufacturing pumps that work on wave energy and mix up the ocean waters. Due to this, the carbon dioxide trapped in the deeper layers of the ocean is brought up to the surface, where the nutrients, along with the carbon dioxide and the sun’s warmth, help the phytoplankton to multiply extremely fast.