The Koweek study argues that field trials for ocean artificial upwelling are justified, pulling from a plethora of studies that have analyzed a variety of flow rates – which Ocean-based Climate Solutions’ ocean upwelling pump exceeds. Read Dr. Ian Walsh’s comments next regarding the Koweek study and its endorsement for further research.

The nice thing about David Koweek’s study is that it couples gas exchange and DIC and TA upwelling kinetics with a reasonable range of nutrient stoichiometry and results in a positive net carbon sequestration potential. Along with Wu et al., 2022 currently under review (https://doi.org/10.5194/esd-2021-104), the Koweek model demonstrates that artificial upwelling has the potential to impact CO2atmo.

This is important as I consider the primary unknown in terms of impact on AU sequestration potential is the scaling of nutrient stimulated production uptake of pCO2 relative to the carbonate system kinetics. There is still much to learn about this interaction, but at the least, we see that models that include carbonate system dynamics show positive sequestration potential.

Striking coherence between maximum chlorophyll maps (e.g. Feldman maps) and the microalgae potential, with perhaps the exceptions of the eastern edges of the South Pacific and South Atlantic which look offset higher in the upwelling potential.

Philip Kithil’s graph of pumping rate, and pump diameter (as a valid product) whereas Koweek uses pumping rate and depth) 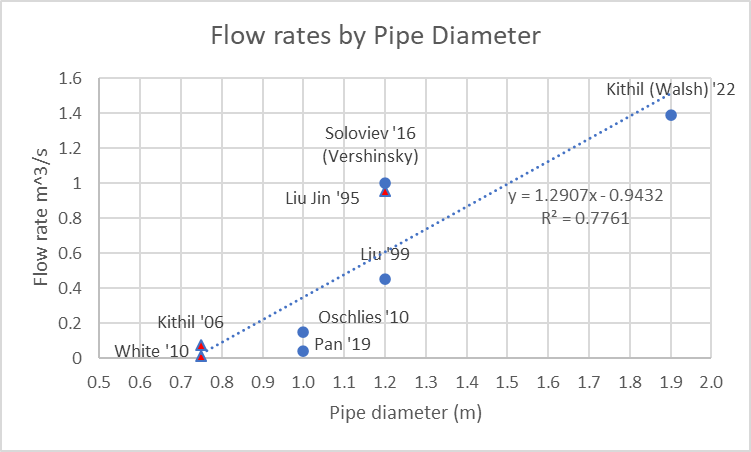 As stated above, Ocean-based Climate Solutions, Inc’s ocean upwelling pump flow rate is significantly higher than the models analyzed in the Koweek paper. This is because flow rate is directly correlated to pipe diameter and less to pipe length (depth of the inlet) as shown in Koweeks’ Figure 1. 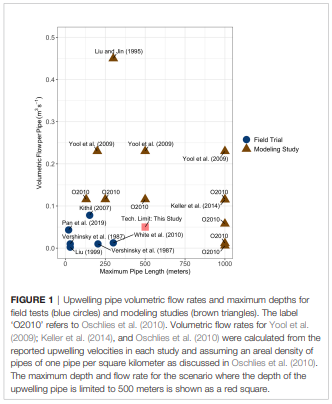 A critical consideration found in the Liu and Jin reference cited by Koweek in this Figure 1, and confirmed by us, is that the water column inside the pipe gains momentum, delivering far more volume than a simple wave height x period calculation.  Liu and Jin determined the simple calculated flow rate was 0.45 m/s, whereas the measured flow rate was 0.95 m/s – greater by a factor of 111%! Our own data found a 60% greater measured vs. calculated flow rate.