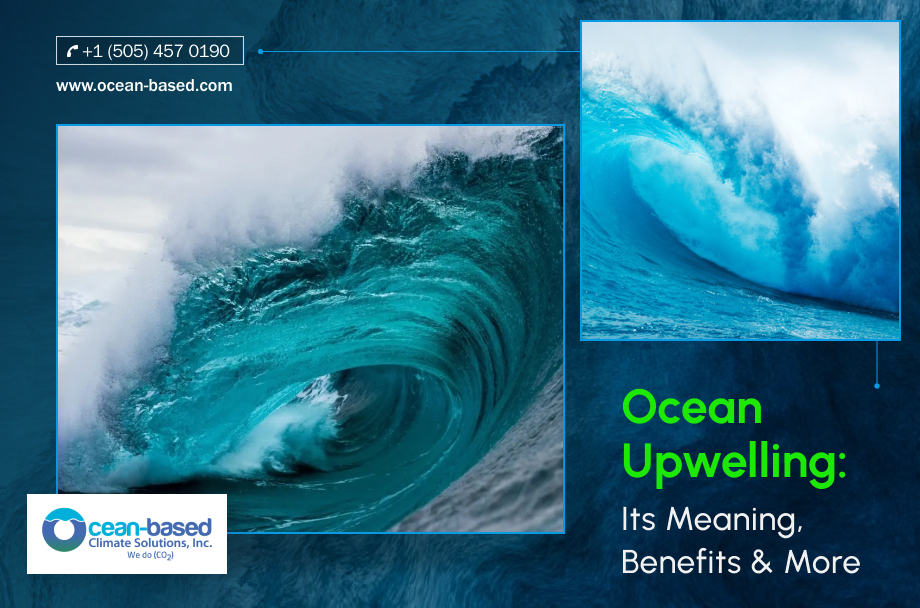 ‘Ocean Upwelling’ is an oceanographic phenomenon. It involves the movement of thicker, colder, and usually nutrient-rich water from deep waters to the ocean surface. Primarily, winds cause this movement. As a part of the process, this water takes the place of the warmer and nutrient-depleted surface water. The top carbon removal companies are now taking advantage of this oceanographic phenomenon and putting it to the best use. With the help of this, they are assisting in an excessive phytoplankton bloom which causes the release of fresh oxygen into the atmosphere.

Phytoplankton are responsible for almost 80% of the oxygen contribution to the atmosphere. Thus, ocean upwelling becomes essential in multiplying more rapidly. The following paragraphs will tell you more about the importance and benefits of ocean upwelling. These are vital aspects for all of us to know to become aware citizens of planet Earth.

Importance And Benefits of Ocean Upwelling

Ocean upwelling comes with a set of benefits that makes it a crucial geographical phenomenon. Knowing about this will make us aware of what happens in our nature. Hence, let us take a closer look at those beneficial aspects for which we must be thankful for ocean upwelling.

a. Brings the nutrient-rich ocean waters to the surface

Not only does ocean upwelling bring the cold and deep ocean waters to the surface of the coast, but it also brings the water to the coastlines that are rich in nutrients. This happens due to the blowing winds and the rotation of the Earth on its axis. As a combined effect of these two motions, the waters are churned, and the nutrients are mixed. Even a topcarbon sequestration company looks out for such areas where the trapped carbon dioxide from the depths of the ocean waters can be churned to put to better use by the phytoplankton along with the rich nutrients during photosynthesis.

b. Results in marine bloom

Deep ocean water is nutritionally richer than surface water. This is because things like nutrients, plankton, and fish carcasses in the ocean, sink to the depths of the oceans. With the process of upwelling, it returns the lost and the sunk nutrients to the surface. Thus, resulting in “blooms” of algae and zooplankton that feed on those nutrients. These blooms subsequently serve as a feeding ground for plankton feeders, fish, and so on, supporting ocean life at the surface.

Upwelling and downwelling are ocean mass movements that affect surface and underwater currents. These movements are critical in stimulating the ocean water, transporting oxygen to depths of the seas, spreading heat, and bringing nutrients to the ocean’s top layers.

Coastal upwelling occurs where winds blow parallel to the shore and towards the equator. Upwelling brings higher quantities of dissolved nutrients to the ocean surface, boosting the growth of plankton, which in turn supports large numbers of fish and other marine species to thrive. Thus, these are where carbon removal companies usually have their work in progress and try to put their artificial upwelling pumps to mix the deeper waters to bring up the nutrient-rich waters.

Water that rises to the surface due to upwelling is often colder and richer in nutrients. Because these nutrients “fertilize” surface waters, they frequently have high biological productivity. And since fish love colder waters, they tend to breed at large in these waters. As a result, good fishing grounds are frequently found in areas with extensive upwelling.

Ocean-Based Climate Solutions Inc. is a top carbon sequestration company that is dedicated to bringing about a substantial environmental difference through phytoplankton bloom. They do so by mixing the ocean waters containing massive amounts of nutrients and carbon dioxide. When these waters are mixed, the phytoplankton multiply faster as well as produce vast quantities of fresh oxygen during photosynthesis. You will be delighted to learn more about their mission. So, visit their official website to get a complete overview of the same.