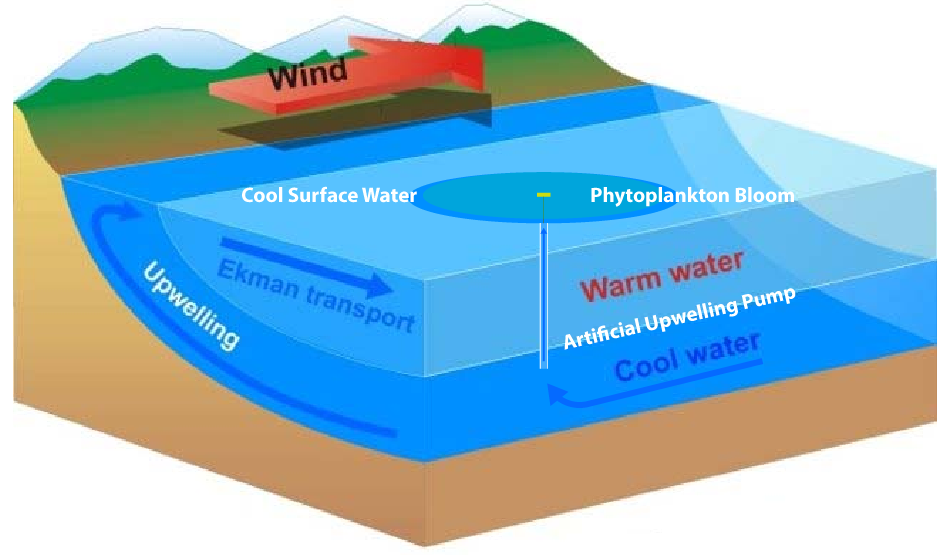 The oceans absorb nearly a third of the worlds excess CO2 emissions with phytoplankton, microscopic plants. A cup of seawater holds nearly a quarter of a billion of them. Phytoplankton thrive on ocean nutrients. And like all plants, absorb carbon dioxide to live. We believe that the oceans can restore our climate to pre-industrial levels if only there were enough phytoplankton to do the job.

The oceans are huge, covering 71% of the Earth’s surface, so much bigger than the forests of the Earth. The oceans really have the potential to make a big difference on global warming.

When ocean nutrients are abundant, phytoplankton populations can explode into blooms so vast, they’re visible from space. Phytoplankton have been recycling carbon dioxide for 2.6 billion years. They are recycling that carbon dioxide which gets sunk to the bottom of the ocean. To metabolize ocean nutrients, plankton must take in carbon dioxide. When they die, masses of them sink all the way down to the deep seabed, carrying trapped carbon from our atmosphere along with them.

One such strategy for sending even more phytoplankton to the bottom of the ocean is with Artificial Upwelling.

Natural upwelling is the upward vertical movement of water between the well-lit surface ocean and the dark, nutrient- and CO2-rich deep ocean, according to The National Academy of Science, Engineering and Medicine (NASEM) which on December 8, 2021 released a comprehensive report titled, “A Research Strategy for Ocean-based Carbon Dioxide Removal and Sequestration (2021).”

In a 2008 paper, David Karl and Ricardo Letelier calculated the net sequestration potential from pump-driven upwelling using data collected at the long-term monitoring Station ALOHA in the North Pacific gyre near Hawaii. They calculated that upwelling of waters from 200 m or deeper provides excess phosphate which triggers a sequence of nitrate and then phosphate uptake drove blooms of phytoplankton. The secondary phosphate bloom fixes more dissolved CO2 than is upwelled, resulting in net CO2 sequestration. Using the Karl-Letelier calculations, we build our pumps with the intake at 500 m to maximize the carbon fixed per unit area relative to the vertical length of the pump.

To determine the upwelling flow rate, in 2007 we conducted a sea trial of a 0.75m diameter by 152m deep upwelling pump which was substantially identical to our current design except for dimensions. With triaxial accelerometers on the valve flappers recording open/close cycles, and temperature sensors top and bottom, we determined the time for deep cold water to surface. The outlet temperature sensor showed cold water arriving at 08:45:00, about 15 minutes after the first upwelling stroke. Dividing tube volume by elapsed time gives a flow rate of 0.078 m3/s.